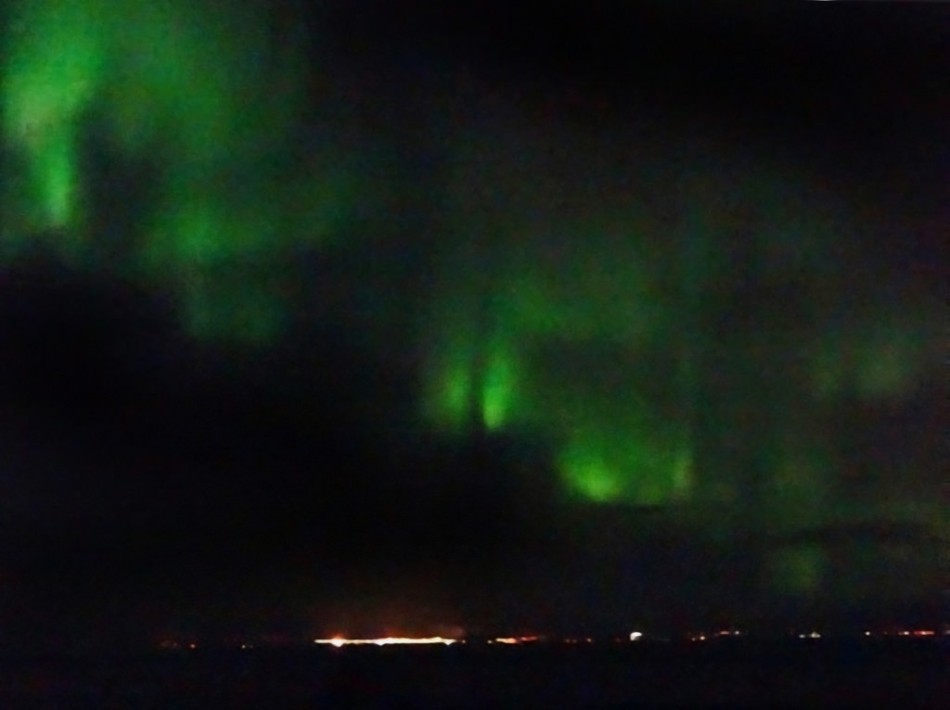 The reason there is no Icelandic mythology about the northern lights (apart from that invented by the tourist industry in the last 30 years) is that because during the Middle Ages (where the folklore comes from), the magnetic north pole was close to Iceland, so the band around the pole where the aurora occurs was far to the south.

We drove to the south coast and arrived about 9.30pm. It was cold, around -5°C but with another 10 degrees of windchill, but the skies were clear. So clear and dark that you could make out the milky way. I tried, but the milky way was a little too much for little cam to cope with. And we waited, got colder. After an hour or so, five layers just weren’t cutting it any more. And we waited. And got colder. By 11pm I’d just about had enough. I was so cold and so tired I was ready to pack it in. The Kris said, It is starting.

To the north we could see the thin, vertical milky band we had been told to watch for. And then there they were, the northern lights. Mostly green but with a faint touch of orange. Then they were all around us, to the north and to the south.

I shot and shot and little cam performed magnificently, far better than a pocket sized camera has any right to. I carried on shooting until I was so cold that my hands wouldn’t move and I couldn’t work the camera any more. So I put the camera in my pocket and stepped out into the wind and watched. And then they started to dance, the lower edge rippling and bucking like a curtain in front of an open window.

Then it was too cold and just too dangerous to stay any longer, so we drove back to Reykjavík. It was one of the scariest drives of my life, drifting snow obscuring the road and nearly getting blown into the ditch by cross winds several times. And they followed us all the way, all around, even into Reykjavík after we hit the street lights.

I got to be about 2am but I couldn’t sleep. I was buzzing. Never, ever dreamed I would see anything so magnificent. 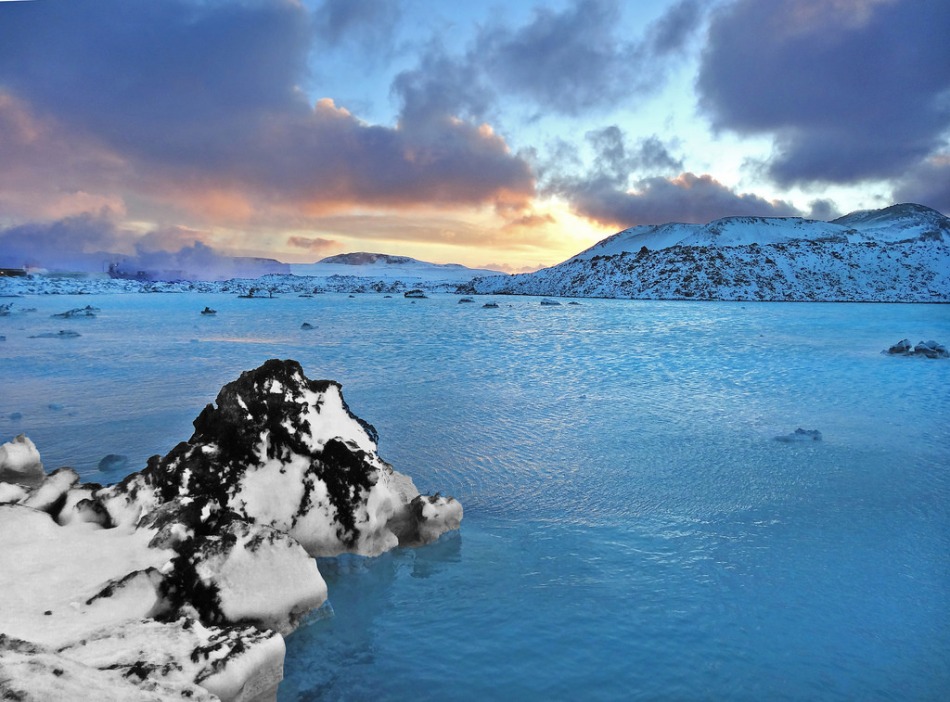 We set off in darkness, and frankly, it was looking a bit grim. Then, after an hour’s drive, just as we arrived, we were blessed with the most spectacular light I have even seen (since the previous day!).

Stunning. So glad we did this trip in the winter. So lucky with the weather and the light. 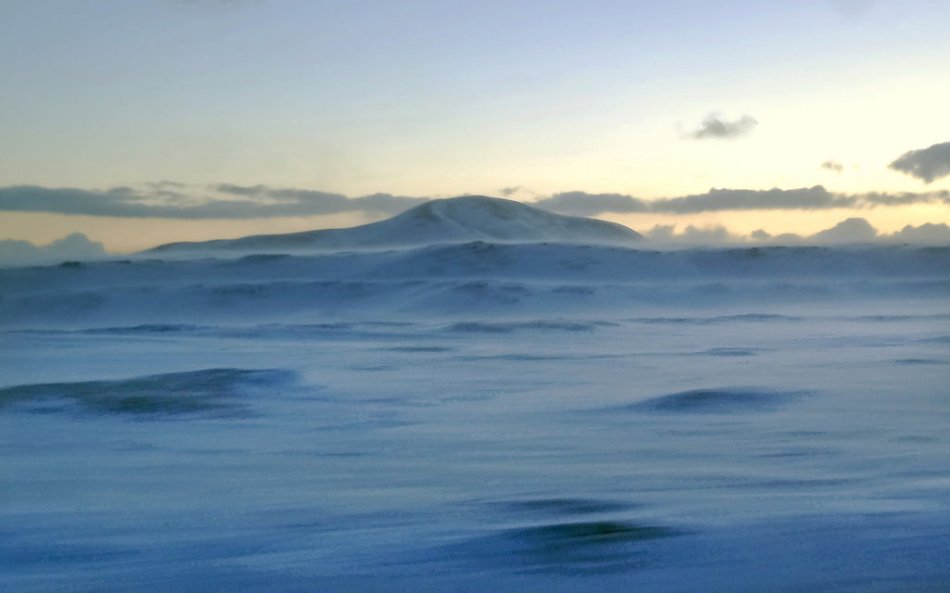 During the Cold War in the 1960’s, the Americans, trying to court the Icelanders and limit Russian influence in such a strategic territory, granted Icelandair permission to operate the first low cost transatlantic flights. There were just two problems. European national carriers were pissed off and successfully lobbied their governments to refuse Icelandair permission to land. Luxembourg didn’t have a national airline, so that’s where they finished up. (I’ll be honest, I didn’t know Luxembourg had an international airport.) The other problem was that the American airlines were equally pissed off and successfully demanded that all passengers must break their trip in Iceland and spend at least 24 hours on the ground before finishing the Atlantic crossing. Good for the bars and restaurants in Reykjavík, but then people got bored. So the Icelanders invented The Golden Circle, seven hours of Iceland’s Greatest Hits – Now That’s What I Call Vulcanism 69.

This was the only day we had “bad” weather. But it wasn’t really bad – it was good. I’m so glad I saw Iceland like this, not in the summer and rammed with tourists. At Thingvellir it was still dark and snowing – but so atmospheric, and so beautiful. At Geysir and Gullfoss there was driving snow, but by the time we reached Selfoss, it had stopped.

And then, on the way back, something magical happened. An hour of the most perfect light. Iceland at its very best. Unforgettable. 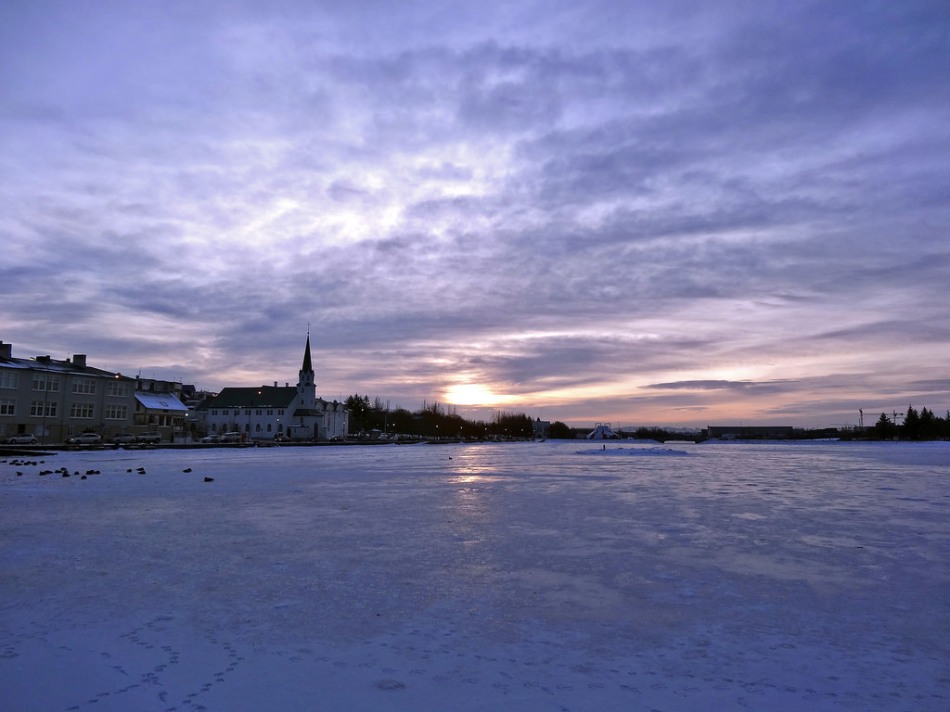 First impressions of Reykjavík were very favourable. I like the relaxed small town feel and the attitude of the Icelanders, who are as likely to tell you to f**k off as to have an nice day (sometimes both in the same sentence). Sure, it’s expensive – but not as expensive as London.

And then, when the sun hit the Esja mountains, I started checking house prices and looking for jobs. I could live here.