Eyes in the back of their heads

Jumping spiders are a firm favourite with photographers and it’s easy to know why. Unlike most spiders, they stand their ground and stare you in the eye, sometimes even displaying to the camera using the elaborate visual language they employ if they happen to catch sight of their reflection in the lens. It’s hard to think of a more visually-oriented animal than this – and before you say “hawk”, remember that jumping spiders live in a 360 degree world and literally have eyes in the back of their head:

It’s easy to think of the visual experience of these spiders as being like driving a car, with attention constantly switching from the read ahead, to the wing mirrors, to the rear view mirror. But that’s not how an insect nervous system works. Separate, quite autonomous ganglia process and integrate signals into one 360 degree picture – although with those huge front facing eyes staring at you though a macro lens it’s clear where most attention is fixed.

Isn’t she lovely? (as Stevie Wonder might have said). No, it’s not a Tarantula, it’s a Black Lace Weaver, one of our common garden spiders. This female was about 15mm long. That’s Black Lace-Weaver, named after the rather tatty “web” (being generous there) these spiders construct, rather than Black-Lace Weaver, as in push pineapple, shake the tree. Just in case you were wondering.

The Eyes Have it 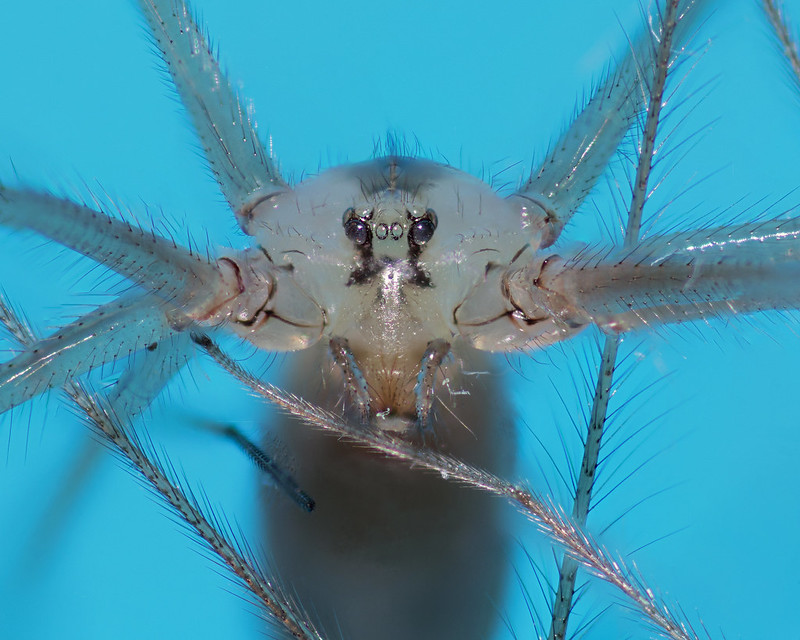 This photography lark’s quite simple really. You just focus on the eyes.
27 times, then spend two hours focus stacking in Photoshop. Apologies to all the arachnophobes, but dare I suggest this one’s worth looking at LARGE?

Interesting beastie, Pholcus phalangioides. It’s what biologists call a “cosmopolitan” species, meaning not that it reads glossy magazines with articles titled How to satisfy your man (female spiders aren’t really into that – quick snack is more like it), but that it has spread around the world. Originally from warm climates and caves, they’ve found that centrally heated houses in colder regions are quite acceptable substitutes, so they’ve moved in, hence why they’ve become known as Cellar Spiders (or Daddy Longlegs Spider, if you must). Here they stretch out, bask in our waste heat, and tuck into our house spiders and silverfish. No, those aren’t cobwebs in your cupboards and under the sink, that’s an ecosystem.

November 10, 2015 | Categories: Uncategorized | Tags: blue, focus stacking, macro, spiders | Comments Off on The Eyes Have it 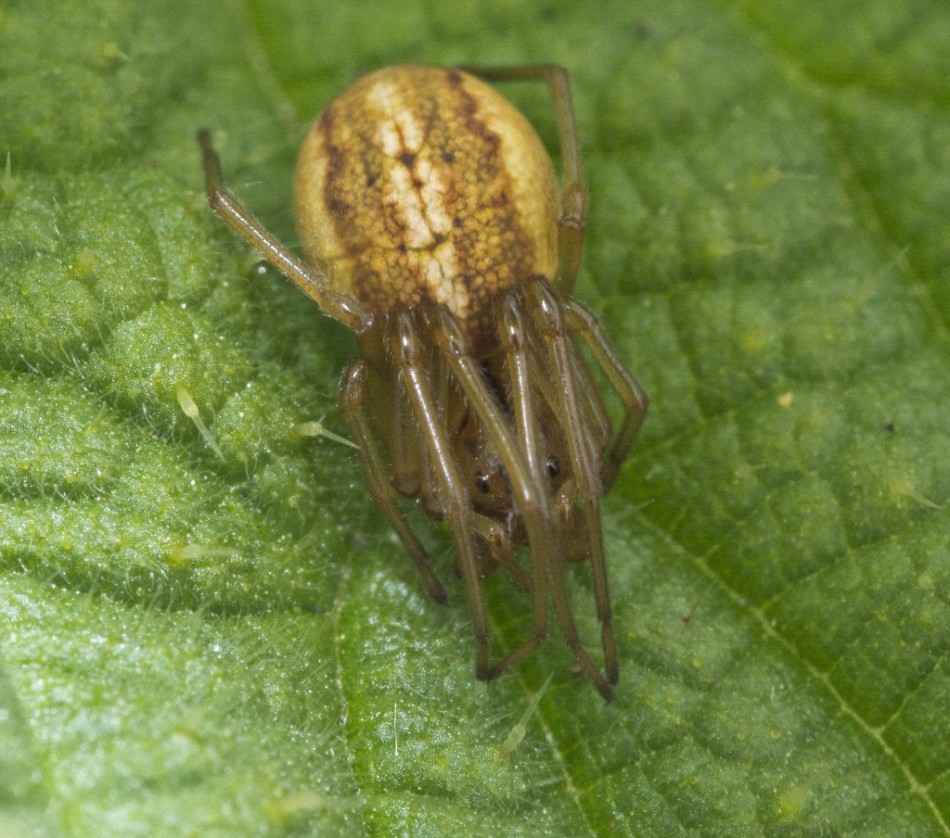 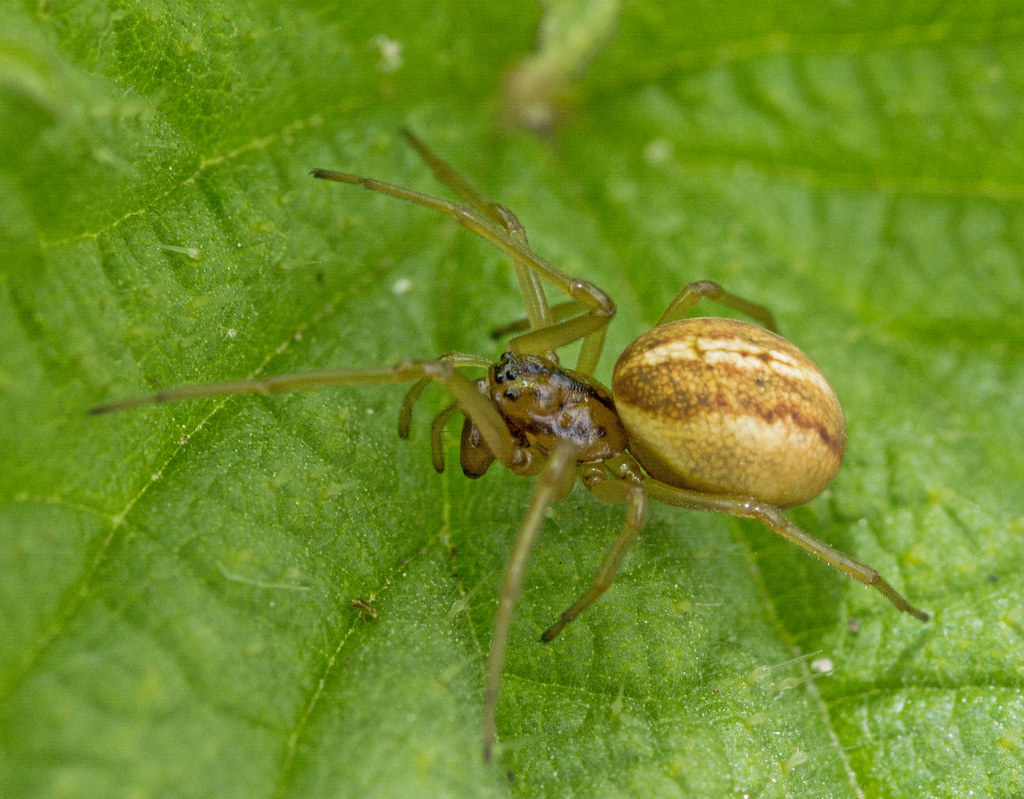 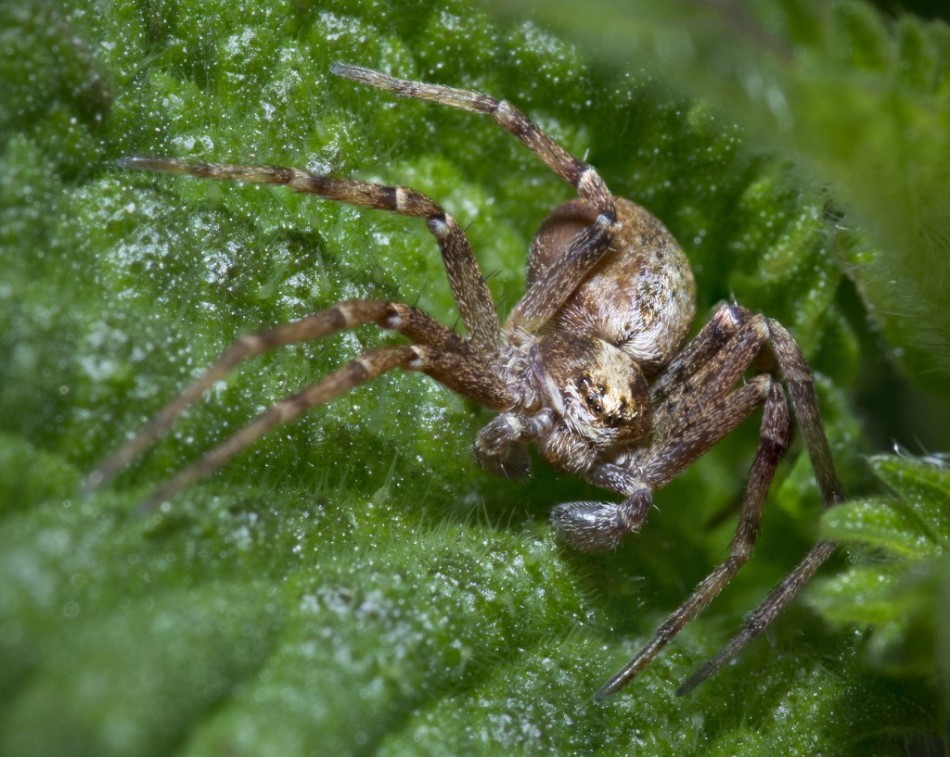 I know spiders aren’t everyone’s cup of tea, but then not everyone likes flowers either, so forgive me. This is an immature male and these species are hard to identify for sure, but if you view the large version you can see why I’m pleased with the level of detail captured. 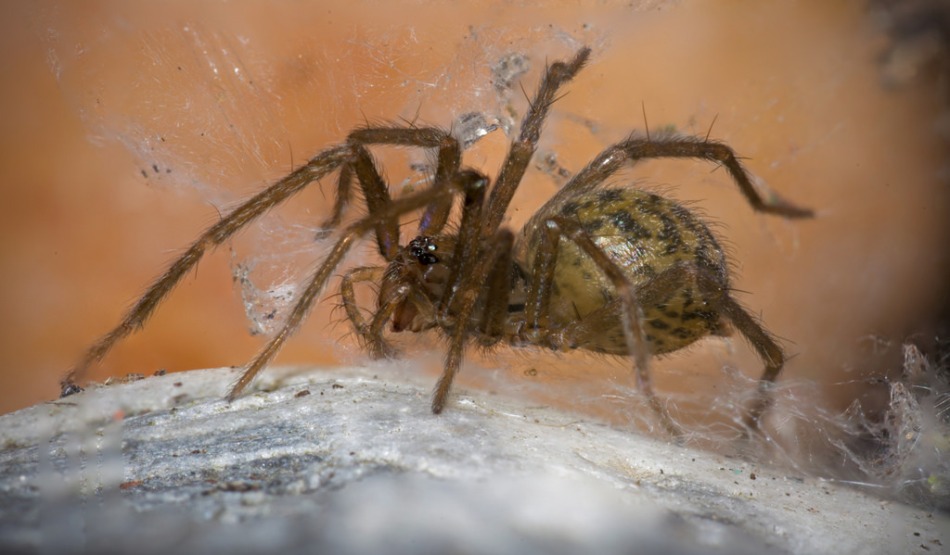 This spider from my garden is probably one of the Tegenaria species (but not the common house spider, Tegenaria domestica). It’s also my second attempt at focus stacking, and my first attempt at at animal rather than a plant. This co-operative spider allowed me to get eight shots off which I then stacked in Photoshop. This spider was approximately 4mm long nose to tail (excluding legs). Feeling a bit chuffed with this 🙂 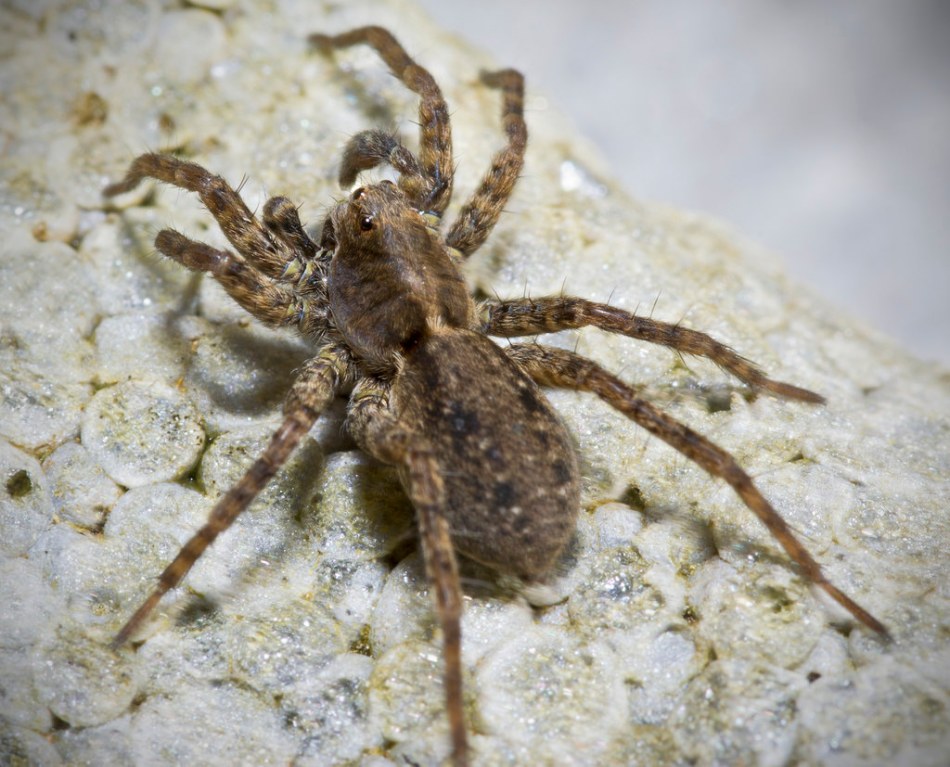 I wouldn’t say I was arachnophobic, but I’ve never been particularly keen on spiders. It does depend on the spider though. Some spiders don’t bother me at all but house spiders give me the creeps. Over the last couple of weeks through I’ve become fascinated with wolf spiders, which don’t bother me that much (apart from when they suddenly loom up in the viewfinder in a macro shot, which can be pretty disconcerting).
Every year there seems to be one “perfect” shot which escapes me – where I didn’t press the shutter at exactly the right moment. I can remember last year’s shot-that-got-away very clearly, and I have a horrible feeling I may have just had this year’s, a head on money shot of a wolf spider filling the viewfinder (before it darted away moments before I could capture it). Looks like I’ll just have to keep trying. 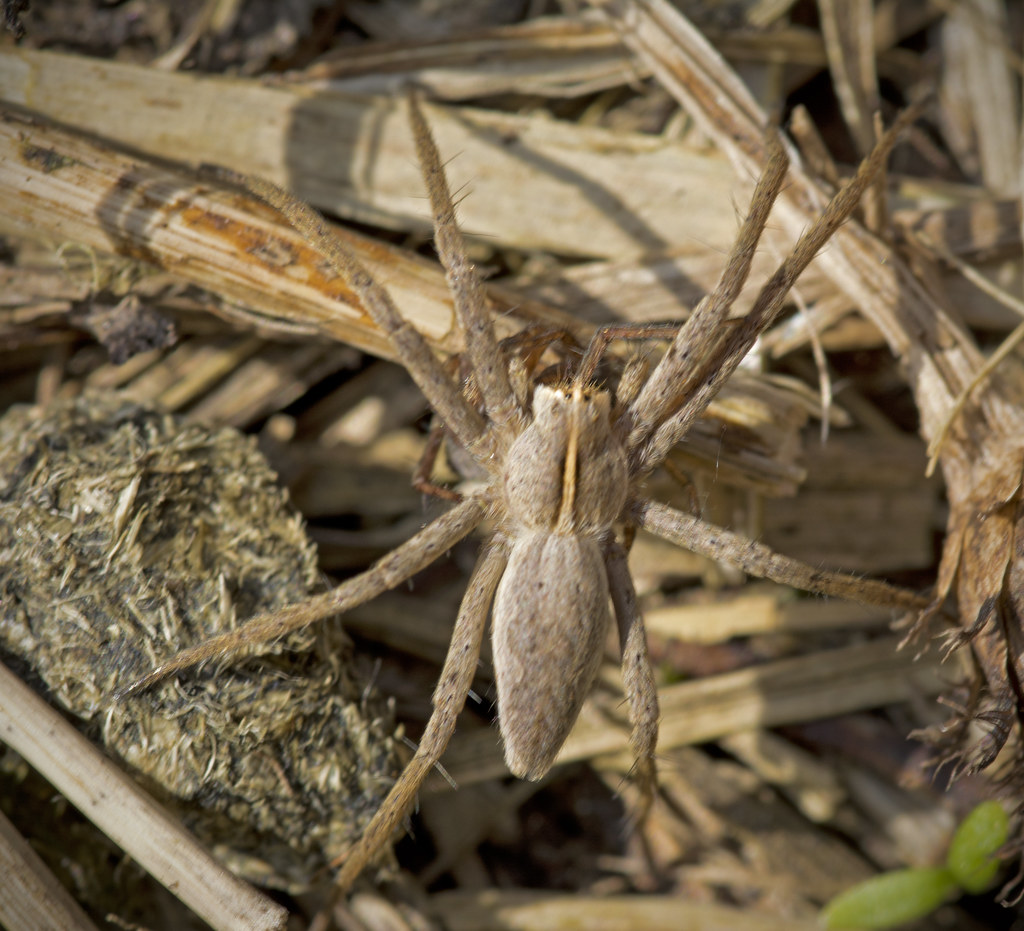 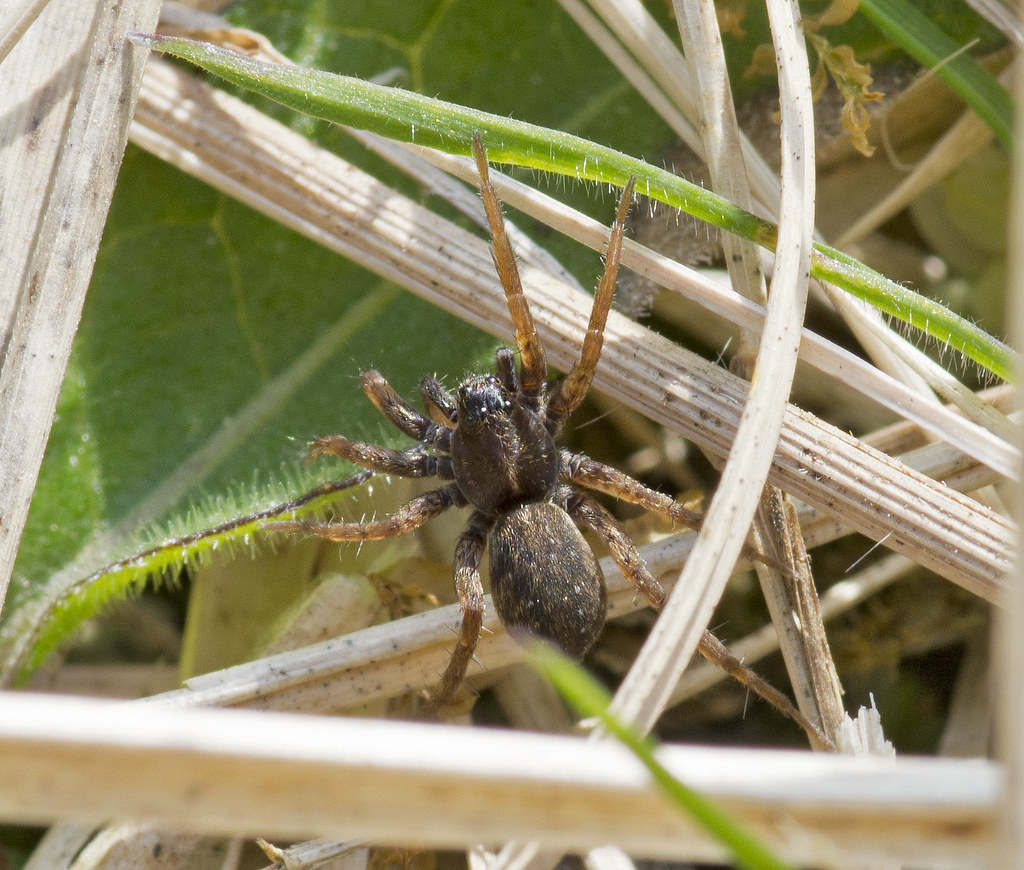